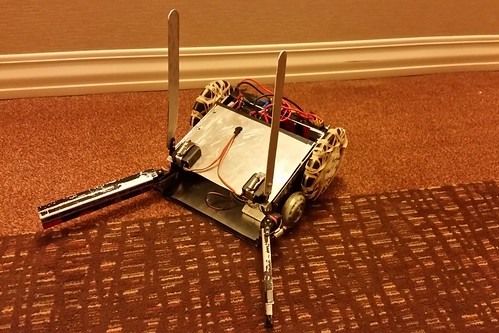 The robot we built for the 2015 National ATMAE conference is named “Dusty”. He’s an award-winning robot, having taken second place overall! The picture above shows what the front of our robot looks like. The heart of this robot is a Raspberry Pi 2 Model B, and all of the code running is written in Python. 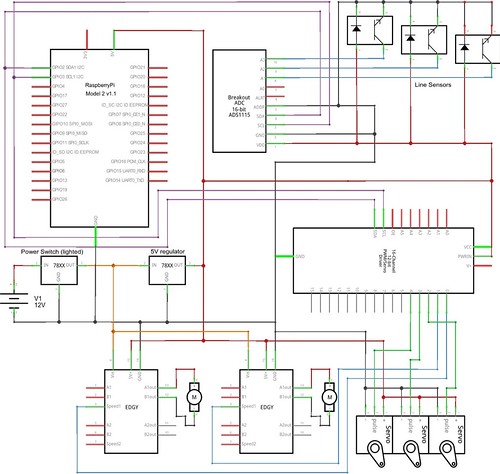 Dusty is the successor to Think Tank. Approximately a week before the annual ATMAE competition we faced too many issues with Think Tank to continue moving forward. Dusty was designed and built over the course of about 3 days. After the mechanical part was done our programmer faced the challenge of modifying the Think Tank code to run Dusty.

The night before we left for the competition we spent hours having the 5 operators get acquainted with Dusty’s controls. During the last round of practice Dusty’s right gearbox failed and the team stayed in the shop until 2am trying to fix it to no avail. During the 9 hour drive to Pittsburgh we bought an $18 Harbor Freight Drill. Our first task in the hotel room was disassembling the drill and modifying the gearbox to fit in Dusty and interface with the drive wheel.

Thankfully, Dusty survived surgery and was able to compete in the competition. Our programmer became our main operator due to his extensive experience operating Dusty while working out the bugs in the code.

Dusty was one of, if not the only, robot to make it over the entire obstacle course, however his line following sensors could not find the line in the crazy carpet pattern (not the one in the picture). Dusty was able to collect all of the blocks in manual mode and make it back to the start going through the obstacle course again and then unloaded the blocks 1 by 1 autonomously.

We learned a lot from Dusty. Those lessons are currently helping us build Dusty’s unnamed brother. We already have a good prototype and are currently waiting on more parts and access to the main shop. 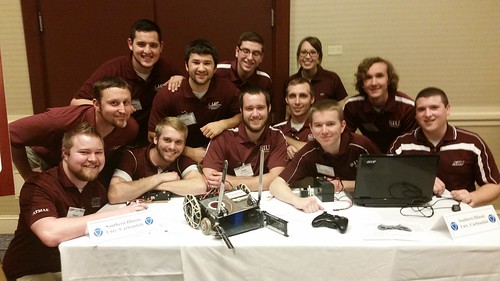 You can view more pictures by going to our ATMAE 2015 album on Flickr.