Deprecated: Methods with the same name as their class will not be constructors in a future version of PHP; my_sidebarcontact_widget has a deprecated constructor in /var/www/vhosts/rso.siu.edu/httpdocs/wp-content/themes/siu-wp-template/functions.php on line 197

Deprecated: Methods with the same name as their class will not be constructors in a future version of PHP; my_footercontact_widget has a deprecated constructor in /var/www/vhosts/rso.siu.edu/httpdocs/wp-content/themes/siu-wp-template/functions.php on line 332

Deprecated: Methods with the same name as their class will not be constructors in a future version of PHP; my_social_widget has a deprecated constructor in /var/www/vhosts/rso.siu.edu/httpdocs/wp-content/themes/siu-wp-template/functions.php on line 464

Deprecated: The called constructor method for WP_Widget in my_sidebarcontact_widget is deprecated since version 4.3.0! Use __construct() instead. in /var/www/vhosts/rso.siu.edu/httpdocs/wp-includes/functions.php on line 4954

Deprecated: The called constructor method for WP_Widget in my_footercontact_widget is deprecated since version 4.3.0! Use __construct() instead. in /var/www/vhosts/rso.siu.edu/httpdocs/wp-includes/functions.php on line 4954

Deprecated: The called constructor method for WP_Widget in my_social_widget is deprecated since version 4.3.0! Use __construct() instead. in /var/www/vhosts/rso.siu.edu/httpdocs/wp-includes/functions.php on line 4954
 Midwestern (MRDC 2016) | ATMAE 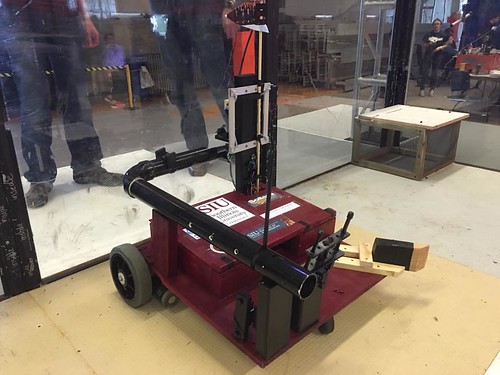 Midwestern is our name for the first robot that we ever entered into the Midwestern Robotics Design Competition (MRDC) held at the University of Illinois (U of I) in March of 2016.

In years past the SIU ATMAE team only competed in the ATMAE competition. However, that is held in November and leaves us without anything to do until the rules for the next competition are released several months later. We found out about MRDC shortly after our first year back at ATMAE after 2 years of not competing. The timing couldn’t have been better. The rules were released in December and the competition was held in March. The start of us competing in more than just the ATMAE competition is what inspired us to rebrand as SIU Robotics.

We registered at the last minute to compete and started building a robot. Midwestern was built in spare time that members had between or after classes with cheap/reused materials and old electronics that we had from previous years with the KISS (Keep It Simple Stupid) idea in mind. Mainly because we had no idea what we were getting ourselves into and didn’t want to spend a lot of money to learn that.

When we arrived at the competition we were amazed by the arena they built for the robots to compete in as well as the other team’s robots. We were the only new team for the 29th annual competition and the rules and objective were slightly modified versions of the previous year’s competition. So all of the other teams (somewhere around 28 teams) had done this before to some extent. One person carried in our 48lb wooden robot while other teams brought their 150lb metal robots in using pallet jacks. Other teams had shop tools including a 6ft metal brake, bench grinders, drill presses, lab equipment, and more while we came prepared with a hot glue gun, a hacksaw, a handful of hand tools, and the left over $18 drill from Dusty. 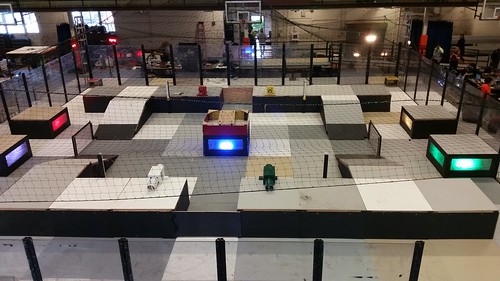 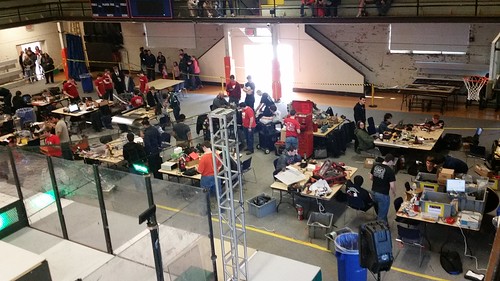 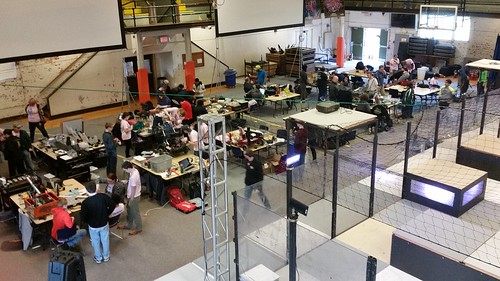 The first day was practice and robot modification. We faced many challenges that day. The door that the robots had to open was lower than the specified height and broke our door opening mechanism. The golf ball dispensers were also all at slightly different heights and our rigid mounted dispenser operator did not line up to 3 out of 4 of them.

To our surprise, the other teams did not practice very often. In fact, the practice rounds usually only included 2 teams. We were one of those two teams almost every practice round. Each round taught us something new about our robot and how the event worked. We replaced our old door opening mechanism with the block at a 45 degree angle (pictured above) and mounted our dispenser operator on spring with an aluminum frame to allow it to adjust to the different dispenser heights. The practice rounds also gave the robot operator more practice operating the robot and getting use to the course.

The second day had rounds almost constantly starting with random placement and working into a bracket. Initially everyone laughed at our wooden creation, but their opinions changed throughout the day. We continued to adapt and change our strategy and robot after every round. We made it to the semi-finals and the general opinion of our robot changed from the laughingstock to the underdog that might just have a chance to win. We squeezed into the final round by only a few points. During the final round a group of people started chanting “SIU SIU” ironically right as we ran out of ways our robot could possibly score points. We placed 2nd place over all, but that wasn’t the end. 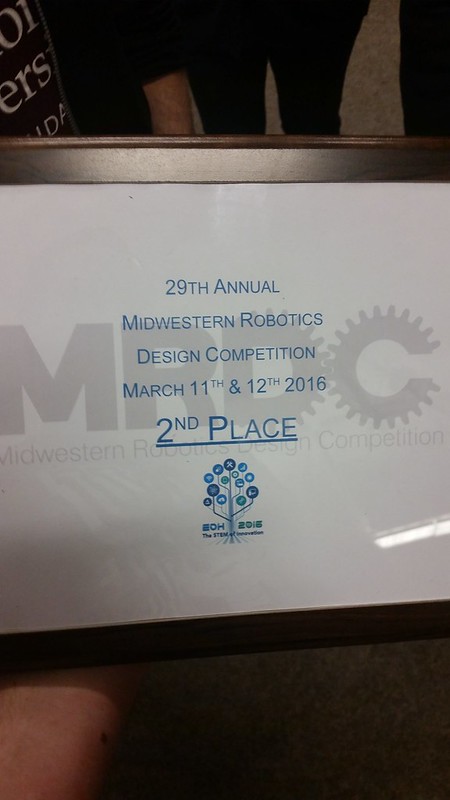 At the end of the competition teams were able to participate in a demolition round. We were not prepared, but in the moment made the obvious choice and said yes when asked to participate. Yet again our robot was the laughingstock because it was made of wood and weighed in at 1/3rd the weight of the other robots participating. But we whipped up a secret weapon. The entire top assembly was removed. A 3rd 1/4 Horsepower 285RPM motor was added, this time vertically with a 2×4 screwed to the wheel. Our robot may have been wood, but once that motor turned on it was the sketchiest thing in the demolition round. Unfortunately our quick modification didn’t work out so well. The spinning 2×4 got hung up on something and the main fuse to the entire robot blew leaving the robot disabled in the first 30 seconds. Somehow another robot broke off a steel spike that they welded to their robot by ramming it into ours. The only damage to midwestern was inflicted by one of the builders when he put the robot in a corner and kicked the demolition spinner off of the robot splintering the wood. We wanted to open up the electronics compartment as soon as possible to make sure nothing was melting/shorting/ or otherwise unsafe. Fortunately everything was find and a fuse replacement later had the robot up and running again. 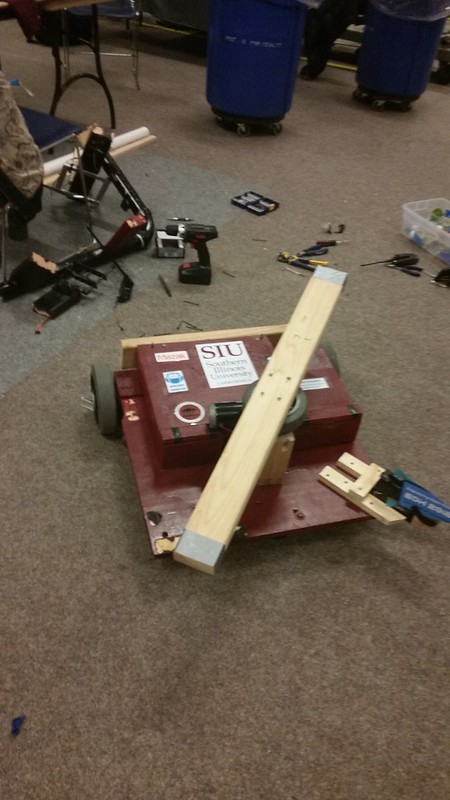 We had an absolute blast participating in the 29th annual Midwestern Robotics Design Competition and plan on bringing multiple teams to the 30th annual competition.

You can view our Flickr Photo Album for this competition at the link below.
Midwestern 2016

More information about the competition can be found in the links below.